I will tell you the story of how I came upon the inward journey known as the love of self. Easy, pervs. I’m talking the love of the astonishing divine within all of us. Incidentally, this philosophy led me to discover that my ability to get over a breakup is very closely related to how much I love myself, NOT how much I loathe my ex. This particular story ain’t pretty, dear reader. Then again, most of my spiritual growth spurts were preceded by some pretty damned ridiculous egotistical breakdowns, which I’ll potentially illustrate in a later post for your personal entertainment.

This distinction can apply to any type of relationship: living the gooey-eyed love, on the rocks, dry as the Sahara, or six feet under. In any case, if you’re struggling with romance, or perhaps on the 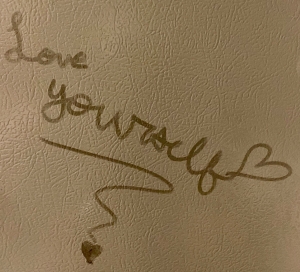 rotten end of a breakup, sit your sexy ass down and read well. This is a road sign to liberation. My dear daughter left this bit of dry erase graffiti on the fridge after one of their visits. It is still there as a constant reminder of the aforementioned inward journey.

Once upon a time, several years prior, I broke off a legit, ring-on-the-finger engagement with Alex, whom I had dated for six years. It was the right thing to do, and we both eventually agreed that one of us had to pull the trigger. It just wasn’t meant to be. The aftermath was a rough road. I chronicled my journey into the dark abyss and my coming to Zen in this five-part “About A Breakup” series.

Shortly after the breakup, Alex had a fun night out with the girlfriends. They reportedly got a little tipsy, went to a male review show, and then she did some making out afterward in the bar, quite possibly at the behest of said girlfriends. I had visions of all the girls getting into a drunken rage and talking about what a piece of shit I was. I was infuriated that I measured my own worth by how quickly I presumed that she had moved on.

My God, was I ignorant. Looking back, it’s quite amusing. I wouldn’t be bothered nearly as badly this day and age as I was back then. It is what it is. But at the time, I was still a baby in the ways of Zen, and the anger boiled (as if I had any right whatsoever to lash out at her). Regardless, I had guns loaded and drawn the next time we talked, and (big surprise!) she retaliated with her genuine Irish Italian fury.

As I recall, and I’ll tame my paraphrasing for the faint of heart here, I yelled out some variation of

FINE, GO MAKE OUT WITH A HUNDRED FUCKING GUYS AND SEE IF I GIVE TWO RAT SHITS!

And then SHE yelled out some variation of

FINE! I WILL YOU SELFISH FUCKING ASSHOLE!

Then some more mindless yelling ensued. DAMN, but I longed for an old school corded phone that I could slam the shit out of. I mean the how in the royal hell could I properly express the enraged end to a convo with a cell phone? By seeing if she could hear how hard I was rapid mashing tiny-ass END button? Meanwhile The Self (my inner spirit) gently reminded me that I was being an arrogant prick. I replied to The Self to fuck off so I could embrace my stupid tantrum in ignorant bliss, before pacing around to find some inanimate object to kick or throw.

As it happened, right around this time period, I came upon a deeply profound passage on love and relationships in a book called Conversations With God by Neale Donald Walsch. Almost immediately, I became acutely aware of just how much I loathed myself. But here’s the kicker: I also realized how much I projected all this shit onto Alex. Essentially, I discovered that for each thing that angered me about her behavior, there was something incomplete within me, and I began an inward journey to explore these incompletions.

Not long after, miraculously, it wasn’t such a knife in the heart to imagine her with someone else. I could honestly close my eyes and legitimately just contemplate her being happy, with or without me. And I called and told her that. And we’ve been good friends every since.

My friends, whatever your case may be, whether you’re seeking ways to improve an existing relationship, whether you’re down because you can’t find romance, whether you’ve suffered a breakup, hell, whether you’re having a look at how you relate to people in general, make it a practice to look within. When someone else’s behavior affects your mentality and emotions, I can almost guarantee there’s something within you that’s incomplete.

Using my nuclear meltdown with Alex as an example, I found Zen Mode when I stopped focusing on what angered me about her behavior, wondering what her plans were, who she was seeing, where she was going, how she was coping, what she was saying, what she was planning, etc.

-Neale Walsch (from Conversations With God)

As romantic as it sounds, the concept of one person completing another is flawed. Two incomplete people cannot make a complete person, my friends. Seek to complete yourself. When you make that your mission, the love you can give to another will be out of this world.

Book: Conversations With God by Neale Donald Walsch at https://www.amazon.com/Conversations-God-Uncommon-Dialogue-Book-ebook/dp/B00AYJIJ2S/ref=sr_1_2?keywords=conversations+with+god&qid=1553823529&s=gateway&sr=8-2